Well, that was different! My first hula hooping class

I've tried 'getting into' hula hooping for a few years now. Kinda half hearted attempts.

I read that you could make your own once, so off I went to the DIY store and bought some tubing and tape. Needless to say, that didn't work!

Last year I bought an Argos weighted hula hoop. That didn't work either - it kept falling on the floor! I was convinced it was the hoops fault and not mine.

Then, via twitter, I heard about the Birmingham Hula Hoopers! AND the classes were held in Moseley just down the road from me. I had to try it out and satisfy my hula hooping curiosity.

I asked my friend Nicky (whose birthday party I went to last weekend) to come along and so we both ventured into unknown exercise territory together. We met Julia who takes the class and she was very welcoming. There were 5 hula students altogether, and a huge array of hula hoops to chose from in every colour and different sizes. 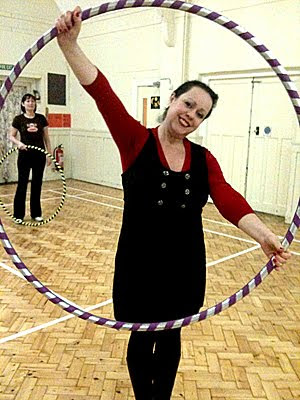 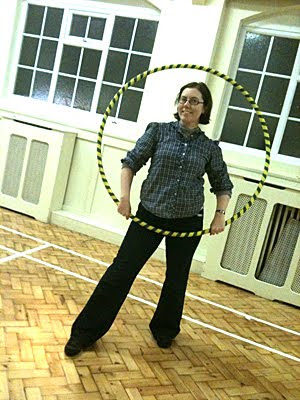 I love this iPhone photo of Nicky!

Julia put some music on and we all started off with the basic hula hooping move with it around our waists. Well, I say basic, it's not that basic for a beginner, but much to my delight I was able to keep the hoop going for longer than I thought - although it still feel to the ground a lot!

It was quite funny at times as we lost control of our hoops and they went flying across the room. No one was injured, but I did managed to whack my nose in an over ambitious over the head move!

We learnt how to twirl the hoop in front of us, and over the head to, which used our arms muscles more. Also we learnt the 'step through' (video) and I accidentally didn't the booty bump (video) in an effort to keep the hula hoop from dropping on the ground!

I found that hooping does require effort, and it's said it is great for toning which I can well imagine. The class was a lot of fun, and at only £3 for an hour it's really good value. Julia also runs a Zumba class afterwards too. Hula hooping starts at 6pm and Zumba 7pm on Weds. Both are held at St Columba's Hall in Moseley.

With a 2 mile run that day (which I'll blog about soon) plus the hula hooping, I managed 90 minutes of exercise that day, which is unheard of for me. I'll definitely give hula hooping another try!
Posted by Karen Strunks at 16:32