Milan Adventure - Part 1 - Travelling to and around Milan

"Would you like to review our new route to Milan?", asked Monarch and Gatwick Airport.

Why yes. Yes I would!

My journey begin from Birmingham and I took the train to Gatwick Airport (with a change a Reading). 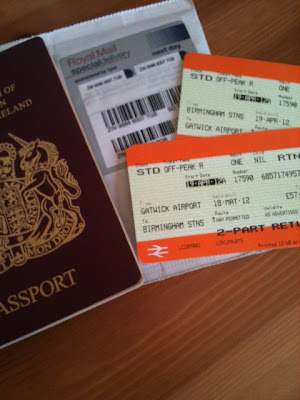 When you arrive at Gatwick Airport by train you are already right at the heart of the airport and it's simply a ride on an escalator (or take the lift or stairs) and there you are. Ta da! It's very hard to get lost at the airport as everywhere is so clearly signposted.

Due to a bright and early 7.30am flight, and a *gulp* 5.30am check in, I was booked into the Gatwick Hilton Hotel for the night. It's only a few minutes walk from the main terminal.


Although the walkway leading up to the entrance of the hotel looks a bit bare, as soon as I stepped inside I was hit by excitement! I hadn't stayed in a Hilton before and I couldn't wait to see what was on offer.

The check-in was really friendly and professional and the duty manager even came over to greet me. I was given the key to my Executive Room on the fourth floor.

I made a little video of a tour of my room.


I found an envelope was waiting for me with a Premium Gatwick sticker, so I could go through Premium Lane security check. 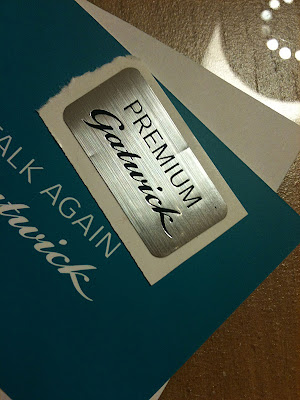 Not only that, these gorgeous chocolate strawberries were waiting for me, along with half bottle of red wine! 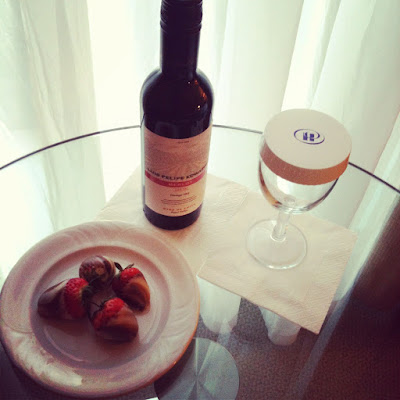 I was almost tempted to just chill out in my room with my strawberries and wine, but I had been told that the Executive Lounge would be open until 9pm for complimentary drinks & food! That was very tempting too.....

First things first though. I was super organised and left everything I needed ready for the early morning start as I knew I wouldn't have time to dilly dally about.

Then it was time to find the Executive Lounge.

It was quite busy in there with a mix if solo people, like me, some working away on laptops and there were groups of travellers making the most of the drinks and food on offer. I sought out the bar and enjoyed a Southern Comfort (okay, maybe 2)! 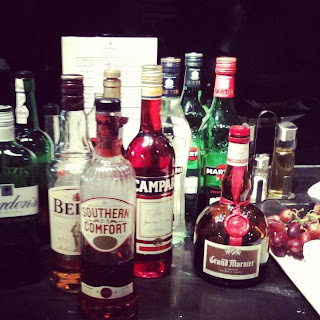 @karenstrunks we'd love to know what you think of our ladies toilets in South Terminal. Sounds strange, but they're definitely worth a peek!
— Gatwick Airport LGW (@Gatwick_Airport) April 19, 2012


The best bit for me? Each cubicle has it own sink, hand dryer and mirror!

And they were nice and roomy too. Great for travellers with suitcases, plus people often like to change at airports so this was a perfect place to prepare for a flight.


Then it was time to venture further into the terminal for a late supper. I found a Weatherspoons pub called The Beehive. 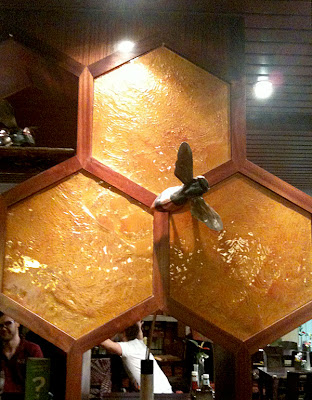 I got a friendly welcome there and enjoyed a warm chicken and bacon salad. 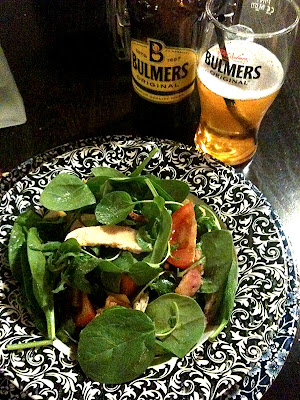 The evening was going too quickly. I really had to think about getting to bed. I normally get off to sleep straight away but it took me a little while as I was just so excited about my weekend in Milan!

A cacophony of alarms woke me and I had just about enough time to grab myself a quick breakfast at the hotel before I checked in for my flight. There was soooo much choice! I wanted to sample everything on offer 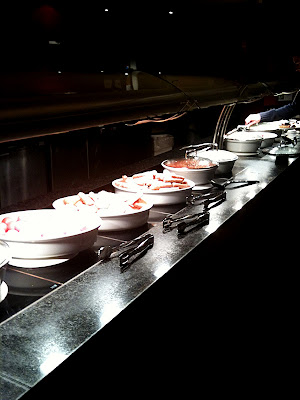 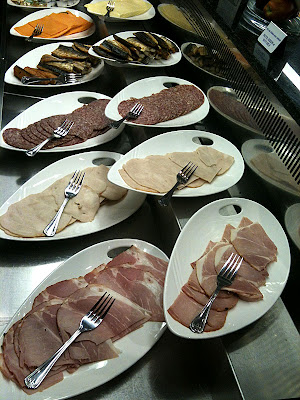 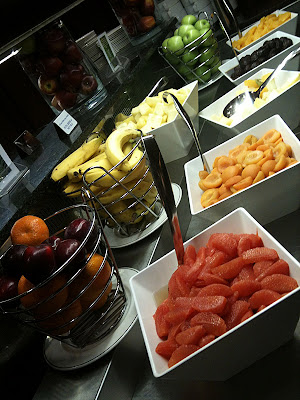 A quick check in with Monarch and no queue... 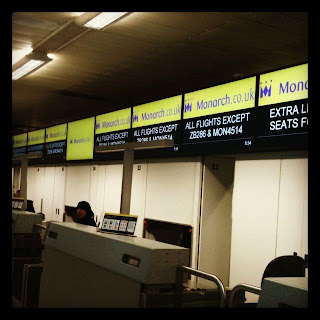 ...and then it was through security via Gatwick Premium; by invitation only! That's what I like! ;) 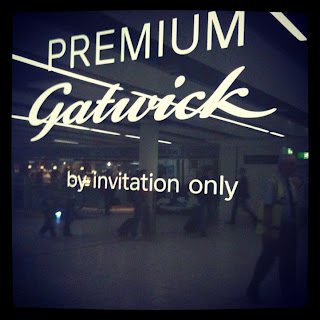 I whizzed through the security check and had just enough time to have a very speedy browse of Gatwick's World Of Duty Free and managed to fall in love with almost all of Kurt Geiger's shoes.

Before I got carried away in all the shops, my Monarch flight was called. 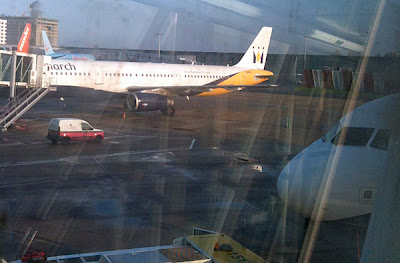 Everyone got a warm welcome from Sharon and Natalie as we boarded our Monarch flight. 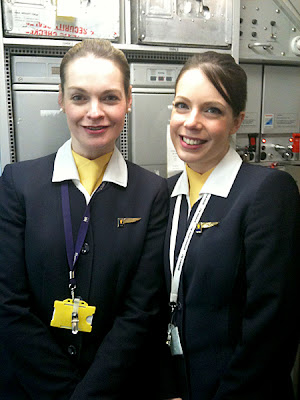 I got comfy in the roomy seat in Row C (lots of legroom too!) and by the time I had read Monarch's magazine... 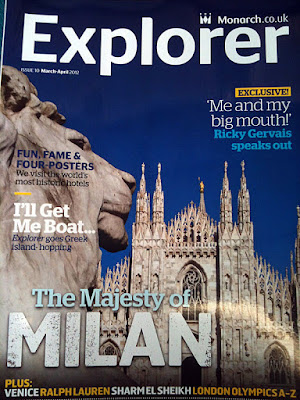 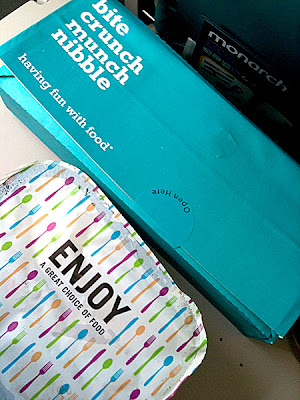 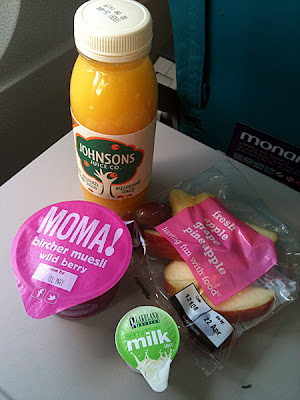 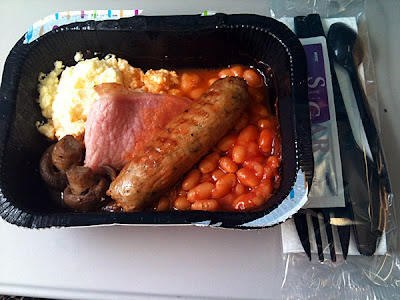 ...our pilot told us all to look out of the window as we were going over the Alps. Stunning!! 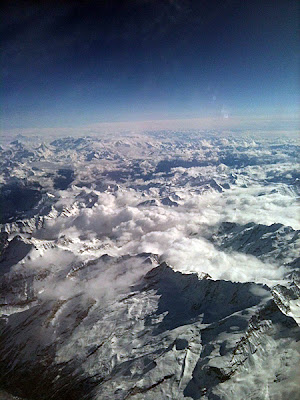 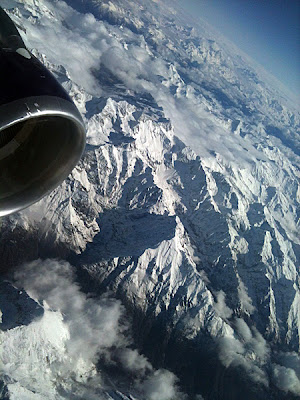 The 90 minute flight went so quickly!

Getting to Milan from Malpensa Airport

I had done a bit of research before I jetted off so I had a good idea of how to get to the city centre.

You can catch a public bus, the Shuttle Bus, or the train, all of which will taken you to Central Station, Milan's main transport hub.

Or of course you can catch a taxi (they are white cars).

If you catch the train, get your ticket before boarding as it works out cheaper.

I opted for the Shuttle Bus.

The buses leave from Exit 4 of the airports terminal for International flights. As soon as you step out of the terminal you will see the Shuttle Bus stop just to the left and the Public Transport Bus to the right.

There were queues for both buses, but because there was a 20 minute wait for the public bus I chose the Shuttle Bus as one bus was pulling up after the other.

It costs €10 one way and is a comfortable coach.

I'd say allow 90 minutes travel time to get from the airport to Central Station as it stops twice along the way. However it only took 60 minutes from Milan to the airport as it didn't stop. Either way, just relax and enjoy the journey!

Central Station is a sight to behold! If you have the time take the chance to have a look around and take some photographs of the stunning architecture.

There is a Tourist Help Point were on the train platform area.

Unfortunately I can't recommend somewhere for you to stay in Milan. However, I can tell you where not to stay - Hotel Gonzaga on Via Vitruvio. I'm not even going to link to it. It was the worst hotel I've stayed in. It was filthy and smelled awful and was overall a horrible experience. At the very minimum it was a roof over my head, and was only one step away from sleeping on the streets. At least that's what it felt to me whilst I was there. I advise you to give this hotel a very wide berth.

Still! I don't want to taint my lovely blog with negativity, so let's move on!

I was in Milan after all and I still had a whole afternoon in front of my to explore the city!

Walk! The city is just the right size for walking. From the Central Station to the city centre is about 25-30 minute walk, and there is the Bus, Metro and Tram too. Milan has a fantastic public transport system.

On my first afternoon I walked in and out of the city centre. I only got a teeny bit lost, but it was quite easy to get myself back on track again. 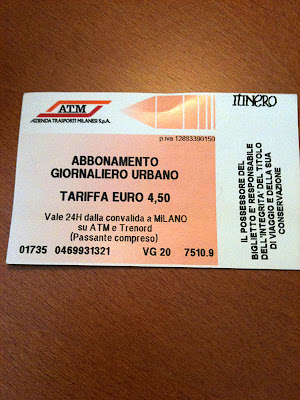 You can also get a 48 hour ticket for about €8.50. They are available from most newsagents and the news kiosks that you see dotted around the city streets. They are valid from the time you first use them, not the time you buy them, so you can buy your tickets in advance even if you are not going to use them for a day or two, and they can be used on the bus, tram and metro for journeys up to 90 minutes at a time.

Or you can pay as you go of course. A single ticket on the metro costs €1.50.

On day two I decided to save some time and catch the Metro around all my destinations. 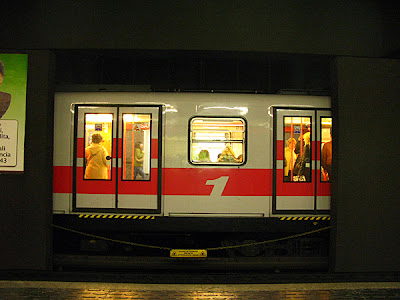 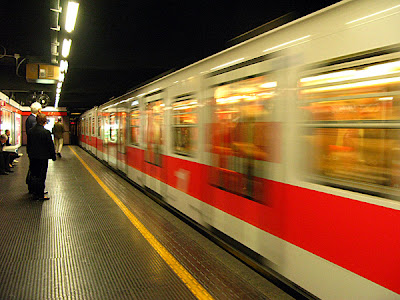 I had a lot to pack in and a busy Must-See list. The Metro is easy to navigate and there are 3 lines that run around and in the city which are colour coded red, yellow and green. I caught 5 metros on day two saved money over buying single tickets and it saved time and effort buying tickets one buy one.

You can catch all my tweets, photos and videos of my Milan adventure in my Storify!

Subscribe in a reader
Posted by Karen Strunks at 12:09