A story about my old dog Honey

Last night my old dog Honey came to visit me in my dreams. 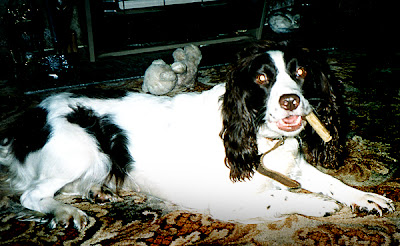 I have no idea why she popped into my mind seemingly out of the blue. I hadn't been thinking of her.

In my dream she came to see me where I am living now and we went out for a walk and I showed her around my neighbourhood.

It was so good to see her, even in my dream, and she was still as fun and energetic as I remember her, but she tire quicker and had to sit down and rest between spurts of energy.

Honey and I first met around 12 years ago when I was living in another part of Birmingham. I had a large house and already 4 cats. They were the result of doing voluntary work at the cattery at the RSPCA!

I can't remember my exact thought process around deciding to get a dog. It wasn't long after I told the boyfriend I was living with to move out. With him gone, I had the place to myself. I could do what I wanted. I didn't have to consult or consider, it would be fun and I might even do more exercise with a dog to run after! I guess it went something like that.

I had never owned a dog before, and I don't remember doing much research about owning one, but that didn't stop me and off I went to the city's dog home.

I found a little male cross breed dog I liked. He was quite unremarkable looking really. A sandy colour with little legs that reminded me of sticks and made me laugh. He loved being picked up and I was all set to get him when the member of staff that was showing me around said 'oh, I've thought of another you might like! Come and meet her and then you can decide'.

We went into a big hallway and out ran this springer spaniel and headed straight for the food area! She paid absolutely no heed to me, and had to be brought over to me and even then you could tell she was just thinking 'food!!'. The lady gave her some lunch and that seemed to satisfy the dog. I umm'd and aaah'd over which dog - how hard to chose!!

Less than an hour later I had a springer spaniel. I bought a collar and lead, signed some paper work and paid £70. I named her Honey, and she happily led me out the front door of the dogs home. I then led her to the bus for the journey home. I called my mum, 'Guess what I've got?!'. 'Not another cat?!'. 'No, A DOG!!!'. 'Oh Karen!'.

When Honey entered the house, the cats scattered every which way! They weren't expecting this intruder. And I wasn't prepared at all. I had no dog food, or dog bowls. What do dogs need? Hmm, now how do I co-ordinate going to the shops with the dog? Do I leave the dog at home? Do I take her with me? Do I tie her up outside the shop? How do I carry shopping AND hold the leash? Somehow I figured it all out and by dinner time Honey had a dog bowl and some food.

Honey settled into her new home no problem. Eventually the cats re-emerged and even became friends with Honey and cuddled up to her to sleep. I got into a routine of walking her every morning and as soon as I got home from work. Luckily I there were some fields nearby and some huge ponds too.

I didn't know much about Honey's background. She came from a dogs home in Wales before she arrived at the Birmingham Dogs Home, and I was told she was around 4 years old. She wasn't too keen on men unless they were friends of mine, which makes me wonder if she had a bad experience in her former life.

Honey was a delight. She was naughty, had boundless energy, was a smart cookie and a quick learner except when it came to walking nicely on the lead. She dragged me everywhere. I tried and tried with her. I looked up every training method going to see if I could get her to walk nicely beside me. I remember one method said that as soon as you step outside the front door and the dog pulls on the lead, you turn around and head back into the house and that's the end of the walk. The poor thing didn't get a walk for about four days and I couldn't keep it up any longer and gave in and took her back to the big fields where I could let her off the lead and she could go mad running about.

I could never, ever tire her out. If she was outside, she could keep going and going for hours! I would tire before she did. She loved the water. Give her a pond, river or lake and she would throw herself into it. One Christmas day there was snow on the ground we went for our morning walk. The big pond was frozen over. Did that stop Honey? She dived straight in and through the ice! I panicked. I lay on the snow covered ground by the side of the pond, grabbed her collar and somehow managed to pull her out. I took her straight back home and by the time we arrived a few minutes later she was like a snow ball; her wet fur attracting big clumps of snow. She was a right as rain. Nothing seemed to bother her.

And so we continued for a few years, but as time went on I got unhappy with work and where I was living. It felt like I was existing, and getting by, but I wanted MORE than that for myself! I had to do something radical and overhaul my life. Big changes had to be made and one of those was to move home. I had my heart set on Moseley, but I knew I couldn't afford a big house with gardens like I had and knew it would have to be a flat. I handed in my notice at work, went travelling for a while and prepared to move house.

But of course, what about the pets?! Four cats and a dog! It was a no-win situation. I would be unhappy if I stayed where I was, yet I'd be unhappy if I didn't have my pets. It was an awful dilemma to be in. I felt guilt right to my core.

When I got the animals I thought I was going to be able to provide them with a home for life. I had never imagined that I would have had to change my life to the degree where I would be without them. I really thought I was doing the right thing when I gave them a home. I felt like a terrible pet owner, like I should never have taken them in. I didn't deserve them. How could I even think about re-homing them?! I had a duty to them.

On the flip side. I had a duty to myself. I had to make changes to my life and give myself opportunities.

It was an awful time. I felt like the worse person in the world. These pets that had given me so much happiness and laughter and love, and there I was betraying them, but slowly and surely I found them all a new home.

Well, actually, one of the cats, the youngest one, got run over. His name was Marble and he was such a sweet little thing. He looked like a female cat.

Kim went to a new home with a family and was the only cat there. She had been getting stressed by the other 2 males cats, so at least she was better off having a house to herself. I got a few phone updates from her new family.

Thank goodness my best friend stepped in and took Toto and Jess. That was such a relief! I got updates and photos from their new home in Lincoln. Jess has since passed away but Toto is still going. I think he must be 16 by now!

Then there was Honey. I found a springer spaniel rescue centre. Coincidentally in Lincoln. The lady who ran it said that she had a couple looking for a female springer. The day I took Honey to Lincoln and said goodbye was heart breaking. Honey had no idea of course and just saw all the travelling as a big adventure.

She went into her pen at the rescue centre as good as gold. I gave her her chewed up favourite teddy - you can see it in the background in the photo at the top - and said my final farewell to her. The next day the her potential new owners visited with their spring spaniel and he stayed the night with Honey and they got on. Then Honey went for a sleep over at their house, and it all went well. The couple had a little boy too. Soon Honey was in her new home and she settled in really well. She was living in the country side and would have had more stimulation in the house with the other dog and the little boy than she would have done with me, so I guess it all worked out for the best.

I moved to Moseley and I swore I would never get another pet. I did though. A little harvest mouse. He lived for two years and broke my heart when he died. Once again, I've said never again! Besides I want to move house. I've been in this flat for 8 years and that's the longest I've ever stayed in one home - 6 years is usually the max. And I want to travel. Without pets I am free to do that.

I've been feeling a bit humdrum this week, which is very unusual for me. I dare the say the constant rain of the British summer is having some affect. Dreaming of Honey last night made me remember a promise I made after I re-homed my pets and moved house; if I was going to give up my animals then I must make it for a worth while reason and not let it be for nothing.

You may be thinking that Honey was 'just a dog'. I get that. Though she wasn't 'just a dog' to me.

I searched for about 30 minutes tonight to find a certain photo of Honey I thought I had in a frame somewhere. This is what I found. 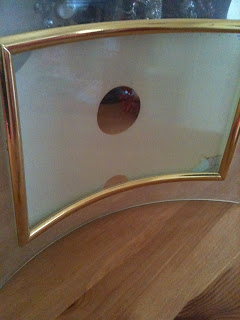 I've taken the photo out and put it somewhere safe, but it's in such a safe place I can't find it! The photo is of Honey on a hot summer day just after she threw herself into a lake and was having the time of her life.

Honey could somehow have fun every moment she was awake. I could learn a thing or two from her, even all these years later!

Say Hi on twitter: @karenstrunks
Posted by Karen Strunks at 20:05

Email ThisBlogThis!Share to TwitterShare to FacebookShare to Pinterest
Labels: about me, Honey, Pets