About a year ago I did an interview about the 4am Project with Jayne Howarth for Touch Base Magazine.

I received the pdf recently, so here it is in all it's glory! Thanks Jayne.

Just wanted to mention that really. I like to keep a note of interviews etc when I can and keep an online record.
2012 is in full swing. I'm just keeping my head down and getting things done.
Though I have had my first nights out of 2012 last weekend. Yeah, party animal!
They were much needed as I hadn't been out properly since before Christmas - when I managed to catch a bad cold.
Night 1 was an evening of drinkies and cocktails with a very good friend who I hadn't seen for far too long! She's a fantastic lady, who is so supportive and amazing to be around. 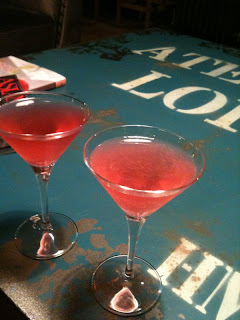 Night 2 was a party to celebrate Nicky's and Sas's birthdays! Fantastic night and great to catch up with good friends who I had't seen for a while. I also got a bonus belated birthday pressie from Sas!
On Monday it felt like New York City was calling me. I received this stunning gift from a friend. The photo doesn't do it justice. I'm keeping on my desk right in front of my monitor so I look at it every day.
Then when I got home, I post card from my NYC pen friend was on my door mat! 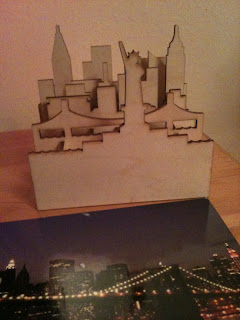 They both made me really happy!
Yesterday myself and Nicky went to Acton in London to deliver a talkaboutlocal training workshop. It went really well, and we have got some new people starting their wordpress hyperlocal blogs. 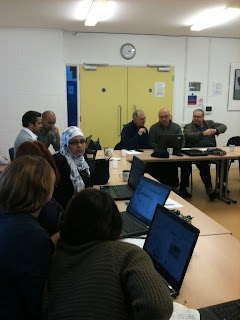 I was catching a train back to Birmingham from Euston and mentioned this to my best friend who lives in Cumbria. Well, she was only travelling home from London from Euston at the same time, so we were able to snatch 10 minutes best friend time together! Yay! It's always great to see her, even though it was for such a short about of time. We are meeting up again in Preston as I'm going to Local Gov Camp and we are seeing each other afterwards for dinner. And I just CANNOT wait for March as we are having a long weekend away in a 17th century cottage in the middle of nowhere in Wales!
This Saturday I'll be going to the first Birmingham Girl Geeks events and doing a little talk about social media and the 4am Project. It's free to come along, and boys can come too! See you there I hope :)
Next week I'm off to Liverpool for a talkaboutlocal training day. We have quite a few workshops coming up so I'll be heading to Cornwall, Southminster, and back to London a couple of times soon!
Then on Friday 27th it's the first Birmingham Social Media cafe event of the year. Come along to that too. It's free, and a great place to meet creatives and businesses who share a love for social media. Meegloo are sponsoring coffee! Check out Meegloo's free app too!
Oh, and I've written a chapter of a book! It's for the Community Lover's Guide To The Universe that Podnosh is curating and the Birmingham edition is called Militant Optimists; people who knuckle down, get things down , give things a go and get the community involved. For my chapter I have written about the 4am Project.  The book should be out in the next few months and an online version will be available to download for free. I'll keep you posted!
Okay, gotta dash! Just a flying update. Say hello on twitter @karenstrunks :)
Posted by Karen Strunks at 19:47