I didn't blog my weight loss report last weekend as I was away in Prague on a press trip. It was a great weekend with lots of VIP treatment (which I have quickly become accustomed to!), and I'll blog about that weekend soon.
So since I last blogged two weeks ago about setting my new weight loss goal, my weight is the same, BUT not without having put on 3lbs after my Prague trip!
3lbs after 2 days away. That's pretty good going haha.

However, I have lost that 3lbs this week by getting back on track. It didn't come as a shock really, but have come to conclusion if weight goes on quickly, it can come off quickly too. So there was no need to panic, or feel down about it. I knew what I had to do to, and have had over 7 months doing that since I started losing weight. 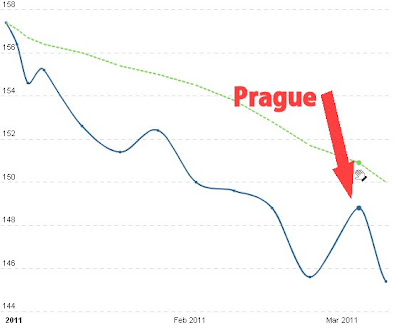 I didn't see going away to Prague as a chance to let loose and go mad with food and treats, and tried to make the best choices I could given what was on offer.
Some of you may know that I am (and have been for about 6 months) trying to figure out if I have a wheat/gluten/diary allergy. Naturally this does restrict what I can eat to some degree ie processed foods and obvious foods like milk/butter/cheese etc. As part of my weight loss I have cut out a lot of processed foods anyway, so it's not a hardship, and I'd guess that my diet consists of about 80-90% unprocessed food anyway.
But eating out whilst avoiding wheat/gluten/diary is quite frankly a pain in the ass! Even in a city like Birmingham, my options are restricted in restaurants and cafes. The only place I can praise for making it easy to make allergy free and healthy choices is New York. I had discovered these potential allergy triggers just before I left for NYC, but luckily there seems to be a deli on every block with lots of healthy, wholesome and unprocessed choices, so eating out there, which I did a lot, was fantastic! Yes, of course there was a lot of fast food, but in equal amount was a wide selection of non fast food too.
And when I'm at home, of course it easy to control what I eat. I buy the food I want to eat and have it at hand, but usually when I'm eating out in Birmingham I'm left with either a boring unimaginative salad, or baked potato, or I face having to feel like I'm making a fuss by asking the waiter what is allergy free on the menu. It's always such a palaver!
So, back to Prague and those 3lbs!
I can see how it happened. Breakfast was provided by the hotel. Not knowing where or when I would be eating later in the day, I 'stocked up' at breakfast time and ate more than I normally would. I had fruit, but also had bacon and eggs as protein is meant to keep you feeling fuller for longer. I carried around some dark chocolate with me to provide some energy bursts when I needed it and grabbed some fruit when I could, but I really don't want to have to always carry around fruit with me.
At Prague airport, I couldn't find anything unprocessed to eat. With hindsight, I may have been able to find a fruit juice drink or a bottled smoothie, but when I get hungry and my blood sugar levels drop too much I can't think straight, and I ended up eating some chips just for the sake of having some calories in me to keep me going.
So, I made the best choices I could as I went along. 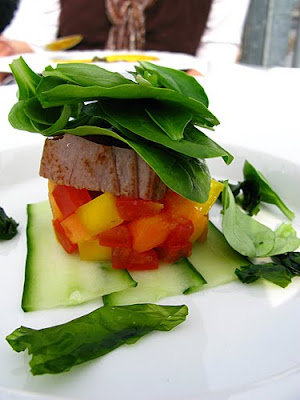 A healthier choice! It wasn't a big salad, but I really enjoyed every bite. And it was a creative salad with with lots of flavours with seared tuna, seaweed, mango, tomato and avocado. 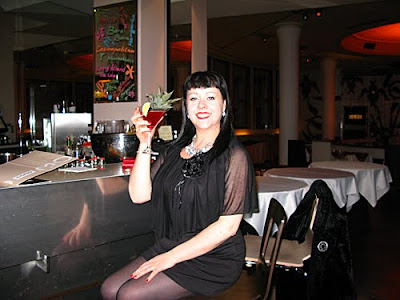 And I did have a few drinks and particularly enjoyed this cocktail. A Cosmopolitan! Soooo delicious! 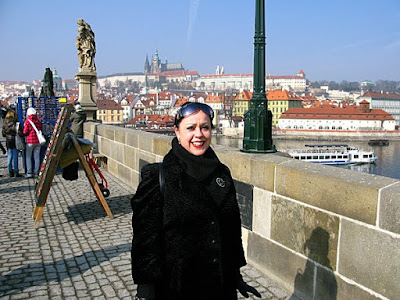 Charles Bridge, Prague. A sunny but chilly day.
As soon as I got back home I got back on track again, and it's worked and the 3lbs have now gone, and I've still got my new goal in mind which is to lose another 7lbs.
I went to a 'black tie' do the other night. It was the Midlands Media Awards so I took a look in my wardrobe for something suitable to wear and found a forgotten dress. I have had this dress for a long time and guess I've held onto it, even though it was too small for a few years, as it's so nice. I thought I would try it on and see what happened, and I got that baby zipped right up! Another size 12 moment, so that's a YAY. 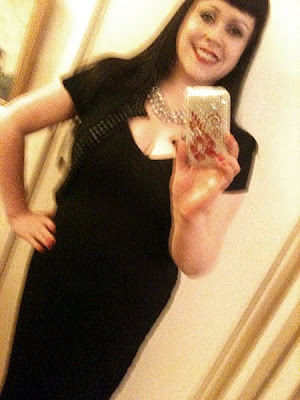 I hadn't seen some of my friends for quite a while so it was the first time that some had seen me post losing 3 stone. One of them asked, "Do you feel better?"
"Yeah I do. I thought I felt ok before, but I do feel different now"
And I DID feel ok before, when I was heavier. As I've said, the extra weight never affected my self esteem, I still saw myself as attractive, and thought being heavier wasn't a bad swap for eating whatever I liked! I used to get annoyed when shopping for clothes, but would ignore suggestions from my well meaning mum and best friend who were brave enough to suggest it might be healthier to lose a few pounds.
The observant may have noticed a lack of running update. I've been a bit rubbish with that and only managed 3 shorts runs in the last two weeks and one hula hoop class!
The week before I packed my diary so tight I left little time for activity. This will now result in me making sure that doesn't happen again.
And this week I have been feeling run down and not 100%. I've got a horrible cold sore (on my nose!!) and only get a cold sore when I am run down. It's just a non specific general tiredness that has been with me all week. My lymph glands around my neck are up, so there's something going on. I've been addressing this by nutrient packing (tons of veg and fruit) and resting. This has all been particularly annoying as I've got lots to do and am now behind schedule on a few things.
Though, at the same time, it's made me stop and think about how much I try and pack into my days and weeks. As much as I don't like to admit it, I can't do everything. There is only one of me and I need to pace myself a bit more.
I have started keeping a google diary, which is really useful, but I've just simply tried to schedule in so much in every hour of the day. So I'll be spacing things out a bit more and putting in more rest time. Hopefully by doing this I will avoid pushing myself to hard and feeling ill like I have this week. Balance! I'm trying! :)
Posted by Karen Strunks at 07:07