Smartie Pants Of The Week

Once upon a time there was a little girl...

That's me by the way!

My Mum has been having a bit of a de-clutter at home and she handed me this brown envelope recently. 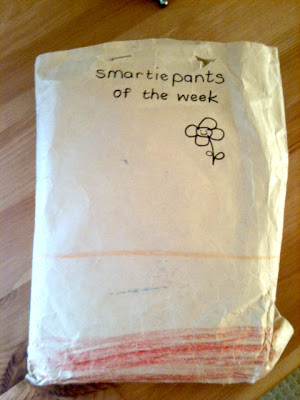 Seeing it took me back to when I was around five years old and living in London. I went to a little primary school about 10 minutes walk away from home.

My teacher was called Mrs Murray, and it just so happened that Murry Mints were a popular sweet at the time.

The Murray Mints TV advert at the time had a song which went 'Murray Mints, Murray Mints, too good to hurry mints'. So, poor Mrs Murray was tortured by all the kids in the class singing this tune, but the bonus for Mrs Murray was that she was never short of a Murray Mint herself as we all used to buy her these sweets. I'm sure she was delighted. We thought we were great - how funny that our teacher is called Mrs Murray and we could sing her a song and give her Murray Mints!

Mrs Murray was lovely. She was very kind and patient and very pretty with shoulder length blond hair. Every week we had Story Hour.
Mrs Murray would sit on a large comfy chair that was in the corner of the room and whilst she was reading that week's story, she would allow one of us to brush her hair. There was always a competition amongst the girls to be able to do this and we had to take turns.
I can't imagine that happening in a class room these days!
Anyway, during this year at school there was the Smartie Pants Of The Week competition. Whatever child had done something particularly well would win a prize. I think that's how it worked. It was probably something that was introduced to make us work harder and do our homework or something.
Each week Mrs Murray would sit in her chair and we would sit on the floor around her and she would pick a child and give them the Smartie Pants Of The Week Award.
There were about 20 kids in my class, and each week someone would get the prize.
I waited and waited.
Nothing.
*hurmph* I tried hard I think. My drawings were very good and I didn't colour over the lines and I worked on my spelling and reading.
Then one week Mrs Murray had us all sitting around again and she had the brown envelope in her hand (it was always a brown envelope and always the same prize).
"I have one prize left. Who hasn't had one yet?"
I raised my hand.
And Mrs Murray, at last, handed me the Smartie Pants of the Week prize!
Well, it was all of a bit of a disappointment as you can imagine! I had been forgotten about, left out and was an after thought!
But it still didn't stop me rushing home to tell my Mum that I had won a Smartie Pants of the Week award. As soon as I got in the front door I put my prize together.
A jigsaw puzzle of....this....thing! :D
So, I've got my award back again. And I will keep it safe. Despite the disappointment surrounding it, I'm actually quite fond of my childhood prize :)

Email ThisBlogThis!Share to TwitterShare to FacebookShare to Pinterest
Labels: childhood, my mum, smartie pants of the week