Becoming a tourist in the city where I live

They say the best way to see the city that you live in is to pretend that you are a tourist and that you are seeing things for the first time. Do you have to travel far to have new experiences?

My friend Elizabeth lives in Cardiff and she told me she was visiting the city where I live, Birmingham. As soon as she mentioned this to me I got so excited and offered to show her around. Rather trustingly Elizabeth put herself completely in my hands for the day and went along with the whole thing!

I love organising and making plans and setting schedules and times and very soon a precision timed tour of Birmingham was on a spread sheet waiting to be executed.

But what do they say about the best laid plans.....? I only went and lost my printed timetable on the morning itself. Minutes before Elizabeth stepped off the train I realised that somewhere between having the day's schedule in my hand hot off the printer and travelling to New Street Station that this vital ingredient of the day had gone missing. But all was not lost - hurrah! I have a good memory so I was able to piece together my plans for the day. Yay.

I made google map of the route we took which is about 4.5 miles.

I had to give some thought into what parts of the city to show Elizabeth and the tour would be a bit biased towards where I know, and what I like, but I did try to bear my friends likes and dislikes in mind too!

I've @storify'd the day of course!  You can see everywhere we went and what we saw along the way.

Thank you to Elizabeth for a wicked day and to my friends Marty and Sas who I haven't seen for far too long, but we got a chance to catch up on Saturday night over a traditional Birmingham dish, the Balti! Whoop!!! :) 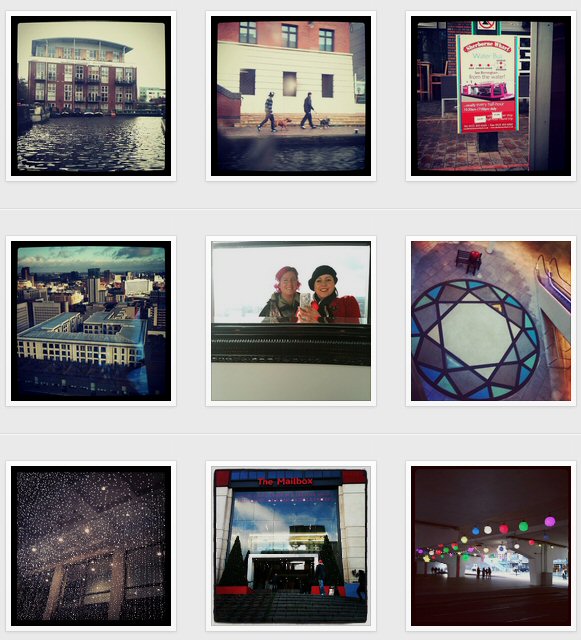